How can a heroic dose of LSD lead to a dedicated spiritual practice?

According to Jun Po Dennis Kelly, that is the only way to go in order to find true freedom with true integrity.

Jun Po has spent his life committed to the truth, the deepest truth, and has the scars to prove it.

In his psychedelic experimentation, he took extremely high doses of LSD, much more intense than your average day-tripper.  Living on the fringes of the law landed him a “government sponsored vacation,” in federal penitentiary.  Yoga and Zen mastery helped him to focus his passion constructively.

Recently, Stage 4 throat cancer took his body to the very edge of survival and back. Jun Po’s life on the edge has given him a serious gift for sharing the truth.

Listen as Jun Po Dennis Kelly shares his uncompromising journey to find out what lies beneath all the bullshit. 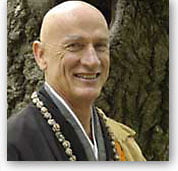 Jun Po Denis Kelly began his Buddhist practice at Zen Center San Francisco in the early ’70s, later becoming a student of Eido Shimano Roshi in New York and subsequently a monk. He received his Zen Master recognition in 1992. Interested in bringing his Zen lineage (Rinzai tradition) into American culture without the Japanese cultural bindings, Jun Po left the monastery and founded the lay Buddhist Hollow Bones order, of which he is abbot.

A yoga instructor as well, he traces his lineage to BKS Iyengar and Pattabhi Jois. He established the Hollow Bones seven-day Zen retreats for the Mankind Project. Diagnosed with Stage IV throat cancer in April 2006, he underwent four months of extensive treatment at MD Anderson Cancer Center in Houston, Texas. That treatment was successful and he is currently cancer-free.