Bobby Bowden Was My First Interview

About a decade before I began interviewing authors, gurus and so-called personal development experts for The New Man Podcast, I interviewed the legendary Bobby Bowden. I had asked him questions in front of the camera a few times, but only interviewed him once. Briefly. And it could’ve cost me my job.

The one time I interviewed Coach Bowden was when I was a subcontracting videographer for ESPN living in Tallahassee, Florida. I had recently graduated from FSU and it was scientifically proven that Bobby Bowden walked on water. Had the iPhone existed back then we would have it documented.

Each week before a game, the producers in Bristol would dispatch one of us along with one of the “Gameday” guys to ask the coach a few questions. 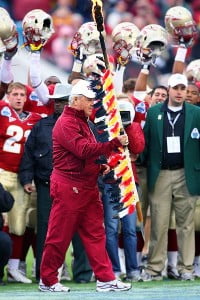 But this one particular time, it was just little old me and a faxed list of questions to ask the coach. Since the camera wasn’t on me, the gig was hard to screw up. Set up a few lights, get some good sound and make sure it’s in focus. As the question-asker, all I had to do was read the questions. Easy, right?

Coach Bowden entered the room, and belted out his customary, “Hey buddy!”

He called everyone “buddy” but yet he had this ability to really make you feel as if you were his buddy. Amazing. His “Hey buddy!” can even melt his humiliated opponents’ hearts. Maybe.

We made some small talk that would have annoyed me if it were coming from some jackass on a plane. But since this was Bobby, it felt like my legendary old friend genuinely cared about me, the high humidity and daylight savings time.

“Bobby is talking to me. His buddy. About humidity. Daylight savings. I am special.” Soooo seductive.

After I made sure the mic was working and the shot was in focus, I sat down and began to robotically rattle off my list of questions. In the past, this would usually take all of five minutes and with Bobby being so dadgum media savvy, he knew how to deliver a tasty soundbite that the ESPN producers could weave into a SportsCenter story.

But this one time — this one special time — he mentioned something about World War II generals and battlefield strategy. I felt something light up in my body. It was curiosity. I was curious! I really wanted to know more.

I ditched the fax.

I asked him to tell me more, and he lit up.

I don’t remember what he said, but we ran on our own for a few minutes. Back and forth, back and forth. I got to experience Bobby in a completely different way. I wasn’t just some kid with a camera and he got to take a break from the X’s and O’s. We just talked about something he truly loved — besides football.

It felt so natural. Like talking to an old friend. But this old friend was arguably one of the coolest guys on the planet.

And then I freaked. What in the hell am I doing?!?

I could lose my job! I’m keeping this man longer than our allotted time! I may not get the soundbite the producers want! They — the ones who write my check — are going to SEE this tape and wonder what in the hell some chump video-boy is doing representing the almighty ESPN while having a little walk in the park with the greatest college football coach to ever live*.

I contracted a bit, stammered to find my place on the faxed list of stock questions and we resumed the robotic “question asking.”

But — the interview was over.

At the end of “the question asking”, I shook the coach’s hand, thanked him and we said good bye. On his way out the door he looked back and said, “Take care, baby.”

Wow. He does not call everyone “baby”.

Allegiance to my alma mater aside, I am proud to have met and spent time with a man that embodies so much of what I admire:

Thank you for being you, Coach Bobby Bowden. You are and will continue to be an inspiration to me.

* It’s true and not up for debate