Tripp Lanier+ by | Everything Else, Money & Career, Podcast Episodes

Have you ever wondered how you could screw up George Clooney’s couch?

Is Arizona a great place to live in your car?

And what wisdom can you glean from a self-proclaimed liar slash pot-smoker slash homeless writer?

This week we’re talking with Esquire Magazine’s Chris Jones about George Clooney, Tiger Woods, Astronauts, John McCain, runaway NFL star Ricky Williams, the band Rush, your bed, your shoes and why you shouldn’t THINK about things too much. 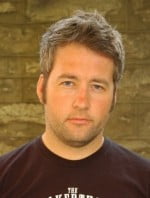 CHRIS JONES is a writer-at-large for Esquire and a contributing editor for ESPN: The Magazine. He began his career as a boxing writer for the National Post in Toronto, where he won the Edward Goff Penny Award, given to Canada’s outstanding young journalist. In 2005, he won the National Magazine Award for Feature Writing for “Home,” a story about three astronauts who were on the International Space Station when the shuttle Columbia exploded. In April, he won his second National Magazine Award for “The Things That Carried Him,” a story that documented the return of the body of Sgt. Joe Montgomery from Iraq to Scottsburg, Indiana.

He lives in Ottawa, Canada, with his wife and two young sons.