Is your desire to improve your life rooted in fear and control?

Are your goals and to do lists just stressing you out?

And how can you confront your fears and learn how to embrace the craziness of life?

Zen Habits creator Leo Babauta is here to talk about chaos, fear, and why all of those goals and plans may be screwing up your life.

Click here to learn more about The Power of Less by Leo Babauta. 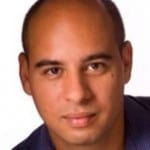 Leo Babauta is the author of The Power of Less and the creator and blogger at Zen Habits, a Top 25 blog (according to TIME magazine) with 200,000 subscribers — one of the top productivity and simplicity blogs on the Internet.

Babauta is considered by many to be one of the leading experts on productivity and simplicity, and has also written the top-selling productivity e-book in history: Zen To Done: The Ultimate Simple Productivity System. It has sold thousands of copies and has reached tens of thousands of readers.
Babauta is a former journalist and freelance writer of 18 years, a husband and father of six children, and lives on the island of Guam where he leads a very simple life.

He started Zen Habits to chronicle and share what he’s learned in his life transformation that started in 2005. In two years, he changed a number of habits through the effective habit-change techniques he shares in The Power of Less:

Click here to learn more about The Power of Less by Leo Babauta.