When ‘Cowboy Up’ Means You’re a Pussy

“I don’t want to sound like a pussy, but she’s just straight up mean to me sometimes.” My coaching client Daryl* was telling me about his wife.

“I ask her questions and she just shuts me down. I try to be helpful and she counters with an attack. I talk about what I’d like to do and she just dismisses me. This sh-t really pisses me off,” he continued.

There was a pause. 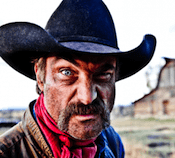 “Well…nothing really. I try to just ‘cowboy up’ and brush it off. I try not to let it get to me,” he said a bit proudly.

“You mean you ignore it? You tolerate it?” I asked.

I was a little confused. “But when she says those things it actually hurts. Is that what you’re saying? Do you want to send her the signal that it’s okay to hurt you?”

Daryl sighed. “I don’t know. I feel like I’m doomed either way. If I admit that I’m hurt, I feel like a wimp. And if I get mad and lash back at her then we’re in a fight. And I don’t want that either,” he said sounding resigned.

I reflected back to him, “So on one hand you want to be tough — what you called ‘cowboy up’. But that involves letting her walk on you. And on the other hand you’re avoiding a fight by letting her treat you like a doormat.”

“Exactly,” he seemed a bit relieved just hearing it back like that.

“Does that sound tough to you?” I asked.

Are You Giving the World Permission to Treat You Like a Doormat?

Daryl isn’t alone. There are a lot of us that are stuffing our feelings, especially our hurt and our anger. As boys we’re even taught that it was manly to do so. To ‘cowboy up’ in this case means to dismiss what we’re feeling and just suck it up.

And I’d go even further to say that in this case, to ‘cowboy up’ — to pretend that you’re tough and resilient — makes you a pussy.

Why? Because the tough road, the brave road involves owning what you’re feeling and wanting. The gutsy move is to put it out there instead of avoid the discomfort or conflict.

Think of it this way…

Doesn’t sound so tough after all, huh?

I’ve done it, and I still catch myself doing it to this day. It’s a tough one. It seems much easier to hide behind the “tough guy” facade and ignore the hurt.

But there’s a problem with this.

It’s like hiding chinese takeout in the fridge. You may not see it, but after a few weeks you’ll sure as sh-t smell it. That atrocious, toxic funk will invade your relationship on every front. And it’ll kill your sex life.

So if you’re no longer the doormat, does that mean you turn into a raging tyrant? Absolutely not.

There’s a way to be open and firm.

Fried Chicken, Waffles, and a Box of Wine

You’re both slow dancing, but she keeps stepping on your foot with her sexy high heel. It hurts like a motherfucker. What do you do?

Do you ignore it? Stuff it? Act like it didn’t happen?

Do you stop dancing altogether? Throw in the towel and retreat to ESPN?

You see, most of the time we’re in a trance. And as amazing as our feminine partners are, they, too are stumbling around in a trance. They have no clue that their actions pack a sting.

Why? Because we’ve been hiding this from them.

If we’ve been ignoring our hurt then we’ve been training them to believe that their actions don’t hurt us.

So, give her the benefit of the doubt. Maybe — just maybe — the intention isn’t to hurt you. By letting her know what’s going on and making your request, you give her the opportunity to wake up and enjoy the time you have together.

And if she’s just flat out mean and is trying to hurt you, well, it’s time to clean out that rotting chinese food in the fridge — if you catch my drift. Get a professional third party or a counselor to help out.

The Nuts and Bolts

So here’s a simple tool you can use whenever an exchange bugs the crap out of you. I’ve over-generalized it to make it as easy as possible to understand.

“You just told me to ABC. Is that correct?”

(2) Next, lay out what the meaning of that was for you. Most often we hear something and then interpret that to mean something else.

“When you told me to ABC, I interpreted that to mean XYZ.”

(3) Now here’s that brave part I mentioned earlier. Tell her how it actually impacted you. If you’re pissed, you’re more likely hurt or scared.

“When I heard that it stung. It hurt. I’m on the verge of being really p-ssed.”

(4) Give her the benefit of the doubt. Ask her if this was her intention. Was this what she really meant to say? Was her true intention to hurt you or to p-ss you off?

“Was this what you really meant to say? Was it your intention to hurt me when you said ABC?”

(5) Last, make your request. What do you want her to do differently?

“In the future, please don’t say ABC to me again. I don’t want to feel hurt or pissed at you. Can we please agree to that? Thank you.”

With this tool and format you…

— Bring her into the moment. You bring awareness to what is being said and done. This pulls us out of the trance. Now the both of you are aware of the offending behavior.

— You own what you’re feeling and how her behavior is impacting you. You’re not stuffing it or dismissing it. Now the both of you are aware of the impact this behavior is having.

— You’re giving the other person the benefit of the doubt. This “attack” could all be in your head. By engaging this conversation you get to figure out if this is imagined, a simple misunderstanding or a full on attack. Make no assumptions.

— You show respect for yourself by clearly stating what you want going forward. No threats. No bullying. Just a simple request.

Is this easy? No. This will take practice. You’ll most likely have to return to the scene of the crime with an index card and some notes to guide you.

But that’s much better than stuffing it, ignoring what you’re wanting, and giving the world permission to do the same.

Show real courage and go right into what you fear. Don’t let the BS facade of being a “tough guy” eat your soul and erode what you care about most in this world — the relationships with the ones you love.

PS Again, this takes practice. Coaching will help you identify where you’re giving the world permission to roll over you. Contact me today and we’ll discuss what’s possible for you.