138 The Tools That Stop Negative Thoughts – Stutz and Michels

Do you ever get negative thoughts that you just can’t seem to shake?

Do you get all fired up to make a change but then eventually end up quitting?

And are you hoping that one day you’ll have all this crap figured out and you won’t have to worry about it anymore?

Phil Stutz and Barry Michels are here to discuss The Tools that’ll pull your butt out of a rut and share how these tools have helped other guys do some amazing things. Is it too good to be true? Let’s find out.

Click here to learn more about The Tools by Phil Stutz and Barry Michels. 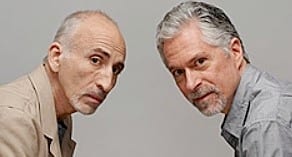 About Phil Stutz and Barry Michels

Phil Stutz and Barry Michels are Hollywood psychologists with a roster of A-list clients. “Especially among the actors, you have people where no one’s told them the truth ever for the last eight years, 12 years — literally never,” Stutz tells Kurt Andersen. “We tell them the truth about who they are, both the strong points and the weaknesses,” Michels explains. “And we’re pretty brutal about the weaknesses, because we want people to change.” Stutz and Michels have shared what they’ve learned with the stars in a book geared to the rest of us: The Tools.

Their tactics combine Jungian analysis with cognitive behavioral therapy. One chapter deals with what Jung called the Shadow. “Everybody has a piece of them that’s insecure — everybody,” Stutz tells Kurt. “It’s not particularly rational and you can’t get rid of it.” When, for example, a screenwriter sabotages his pitch at an important meeting, it may be because he or she is trying to hide the Shadow. Instead, Stutz and Michels say, the screenwriter needs to visualize this “shameful” persona, make friends with it, and enlist its aid in judgmental situations. “Although most people think of their Shadows as the source of their insecurity, if you can change your relationship with your Shadow, it becomes the source of your confidence,” Michels says.

The pair started their careers about as far from celebrity as you can get: Michels as a lawyer with political ambitions, Stutz as a prison psychiatrist at New York’s Rikers Island. In prison, Stutz explains, what you say is nowhere near as important as what you do and how you communicate non-verbally. “There’s a whole level of communication that, within psychotherapy, is not usually dealt with.”

Click here to learn more about The Tools by Phil Stutz and Barry Michels.