What’s missing in the following interview is the perspective of a woman — which is a huge deal considering that we’re talking about women’s bodies and how ALL of this impacts women. I believe all of us — men and women — want the freedom to appreciate beauty in all forms. And I also believe we don’t want to somehow be harmful to others in the process. That said, consider what you’re about to hear part 1 and part 2 (which will focus on the feminine perspective) will follow soon. — Tripp

When a beautiful woman walks by, do you feel dirty for checking her out?

Are you scared someone will see you eyeballing the swimsuit issue?

And how does repressing your appreciation for beauty screw up your relationship?

Artist and Model Society founder David Bollt is here to explore the question — is the nude female body pornography or a work of art to be appreciated? 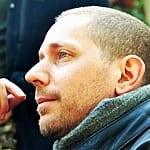 The art of David Bollt has been exhibited in museums, displayed in galleries and toured the world with some of the biggest rock bands in history. His artwork has graced magazine covers, CDs, comic books and posters. His images can be found on clothing, jewelry, sports cars, custom motorcycles and electric guitars. David’s signature style has earned a vast following of dedicated collectors and has captured the imaginations of art enthusiasts from around the world.

As a child prodigy, David manifested his precocious talent at the age of seven, when he spontaneously began creating beautifully rendered images conjured from his wildly fertile imagination. While still in his early teens, David’s images began their ever increasing impact on youth culture as he created cover art for rock bands across the globe. He rapidly gained national recognition as his illustrations appeared on the covers of numerous magazines and posters. These exceptionally unique images attracted a loyal fan base that has been growing ever since.

Before it’s mainstream popularity, David began his study and practice of the ancient art of tattooing. His art quickly took the tattoo world by storm. David’s cutting edge style and mastery of technique wowed fans and professionals everywhere. A myriad of magazine articles featuring David’s art proclaimed him to be one of tattooing hottest talents. His published tattoo designs are prominently hung on the walls of thousands of tattoo studios internationally and are tattooed into more peoples skin than any other artist in history. David Bollt paintings and illustrations have become a main attraction at tattoo conventions worldwide. His artwork is used to promote many of the most prestigious tattoo culture events in both the U.S. and Europe every year.

Today David continues to produce illustrations for CD covers, magazines and posters. His traveling art gallery appears in more than 20 cities every year where thousands of fans gather to get a David Bollt signature and add new images to their collections. Bollt’s original paintings appear in gallery shows fetching prices upwards of $25,000. His prolific talents have earned him a reputation as one of this generations most influential artists.