What About Fear and the Creative Process?

“It’s rough out there. Crazy. If I want to make a big change in my life or business, I want the plan that’s going to work. I want order. I don’t have time or energy or money to mess around. And if I am wandering around I must be doing it wrong.”

That could be someone talking about making a life or career transition. That could be about starting a new business or creating a new product or offering. Regardless, maybe you can relate to this voice when it’s time to create something and face the scary, bumpy stuff.

As a surfer I’ve learned a lot of life lessons from being in the water. Many times I’ve been able to translate an experience of riding waves into something meaningful for my life or business. I know golfers who do the same.

Take this image for instance: 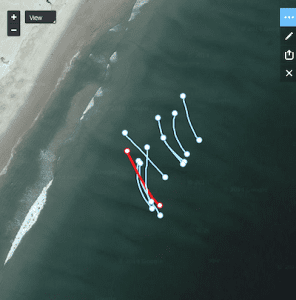 My wife and some friends bought me a fancy pants GPS watch that tracks my surf sessions. This picture is an overhead image of a single surf session. The blue and red lines are waves that I rode superimposed over a satellite image – the blue green stuff is water, the beach is to the upper left. (Is this thing cooler than the other side of the pillow or what?)

So this image shows us the waves I caught during this particular morning. These are the shiny, simple, orderly results. Tah-dah!

And now look at this image:

This is the same surf session, but the added grey lines show all of the paddling and wandering around and waves I struggled and failed to catch. This is all of the work I was doing to successfully catch those waves.

If I want to catch waves, make a transition, create a new product, or (fill in the blank) it’s going to involve some level of chaos and uncertainty. It requires effort. Failures. Expended energy. Even frustration.

When you look at the world and only see the results of others consider that you’re only seeing the first picture. It’s not the whole story.

Instead, remember this second image with its messy spaghetti.

This is the creative process.

Anticipate it. Plan for it. There’s no avoiding it. It’s part of the fun!

But for some this chaos is intolerable. My advice to them? Stay on the beach with everyone else.