Part 5: Why Guys Get Stuck in the Professional Friend Zone 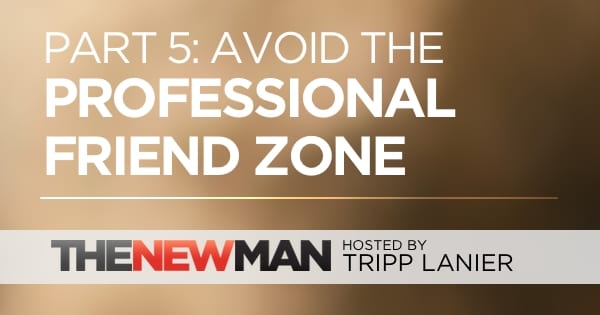 The following is a transcript of this podcast episode:

Click here to learn more about the Authority ebook/audiobook program.

Hey there — this is Tripp Lanier. I’m a men’s coach and I host The New Man Podcast.

When we talk about personal growth and transformation on The New Man it’s easy to forget how this bold, powerful way of living can also be applied to our professional lives.

Which is why today I want to talk to you about the professional friend zone. Now you may be familiar with the standard relationship friend zone. This happens when there’s a sweet, “nice guy” who technically should be doing well with the ladies, but somehow he repels them romantically. The ladies don’t want anything more than to just be his friend. The stereotype says that these gals are more likely to hook up with some jerk at the bar instead of him.

Well, I’m here to tell you that there’s a professional friend zone, too. And it’s full of great guys who want to do good things in the world, but for whatever reason they’re not having the success they want. And as a result their professions and livelihoods are a source of dissatisfaction, struggle, and resentment.

This shows up in a variety of ways…

It’s the consultant who spends dozens of hours with his clients but doesn’t understand why he’s not making enough money.

It’s the coach or therapist who sees 20 clients per week and is bored, exhausted, and still charging the same rate he’s been charging for years.

It’s the professional who won’t renegotiate his contract even though he knows it would cost much, much more to replace him.

Regardless of the scenario these guys in the professional friend zone have a few things in common:

They’re afraid to own their professional value.

This means they’re hoping that their clients or boss will be the ones to say, “Hey! You know, you should really be paid more for what you do.” That’s not going to happen.

Most of these guys have some kind of hang up about money and don’t want to look like a greedy pig. So instead of being fairly compensated for the value they provide, they end up making far less than what they’re worth.

They may be struggling with their current professional situation, but the thought of making a bold proposal, to ask for the compensation they truly want is too scary. They want to avoid the possibility of a no so they don’t even bother asking. And sadly we don’t get what we don’t ask for.

And many of these guys are struggling because…

They don’t offer anything of real value.

They’re offering something “nice” instead of bringing something to the table that will truly make a difference. Sure we may nod our heads and appreciate what he’s offering, but would we spend our money on it? Will we be excited to tell others about it? Nah. And unfortunately neither will anyone else.

I often hear these guys tell me that they’re stuck in some kind of a dilemma — they’re convinced that they have to stay in this lousy situation or risk ending up in an even worse situation. They tell me that going for what they want will somehow negatively impact someone else. They tell me that failure — or even success — will screw up everything they care about right now.

The bottom line? They’re really just afraid to get a little uncomfortable. Like a child’s mind that hears monsters under the bed, these adult men have convinced themselves that they’re facing certain tragedy. Most often the thing they’re so focused on avoiding is no big deal.

And you know what thing usually is? It’s a bold 5 minute conversation.

And I get it. Being bold can be challenging. By definition it’s not easy for me or anyone for that matter. But I find being bold far less challenging than the path of longterm self-deprivation.

Now this all bums me out for two reasons:

1 — I’ve been in the professional friend zone. And 2 — I don’t like seeing good guys who want to do good work in the world piss away their dreams because they were afraid to be bold from time to time.

There’s so many guys on this planet who are sick of their current professional situation. Instead of just being another rat racer, they want to find some meaning by helping others in a powerful way. I want to see that guy out their thriving instead of languishing. I want him to win.

But he’s not going to thrive if he’s not willing to get bold and bust out of this professional friend zone.

Authority: How to Align Your Work, Lifestyle, and Impact

If you’d like to learn how you can avoid the professional friend zone then click here to check out the Authority ebook and audiobook program.

In this short program I talk about the 5 big mistakes that keep guys overworked, underpaid, and on a downward trajectory. I also talk about how I had my head up my own ass, how I came very close to giving up on my dream business that allows me and my family to live anywhere very simply and easily.

Enjoy the Authority program and thanks for listening.