Part 2: The 5 Mistakes That Punch Guys in the Nuts Professionally 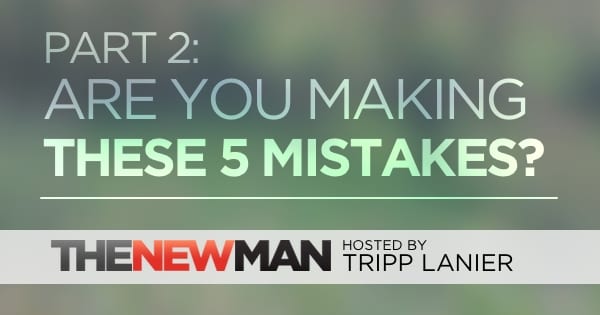 Below is the transcription for this podcast:

Click here to learn more about the Authority ebook/audiobook program.

Hello again. This is Tripp Lanier.

Earlier in this series we talked about why money alone is not the sole reason why our professions can feel draining and dissatisfying. And we also talked about how, as we grow who we are as men, we want our work to align more as well.

Today I want to share with you why, I believe, so many good guys who want to make great money doing good work in the world are struggling to make this happen. And I’ll just tell you up front that I’m an expert in these mistakes because I’ve made them more than I care to admit over the last 20 plus years.

So here we go — these are the 5 big mistakes that keep guys overworked, underpaid, and on a downward trajectory.

Most guys that I meet are playing a role in order to be successful. They’re contorting themselves into a box in order to fit in and be accepted. But unfortunately, simply “being liked” isn’t a business plan.

Instead of embracing what makes them unique and what has them connect deeply with the people they work with, they stuff it all away in an effort to appeal to everybody. Trying to be the “guy everybody likes” means they’re now competing with every other Joe Shmoe to see how predictable and boring they can be.

As a result, these guys are unable to powerfully connect with others or communicate the value they bring to the table. They’re forgettable and replaceable just like any other Stormtrooper working for the Empire.

Because these guys are playing small they don’t provide anything of real value to the world. They’re stuck in the equivalent of the “friend zone” professionally.

They offer something that’s “nice” instead of something that has us say, “I gotta have that!” Offering something “nice” has the world respond with, “Who freakin’ cares?”

These guys stammer and choke a little bit when it comes time to talk about what they deliver professionally. They don’t know how to communicate the impact they provide to others. And because of this, others aren’t excited to share the news about this offering to the world.

These guys give us no compelling reason to say, “You’ve gotta meet this guy. He’s doing something amazing!”

And here’s another thing — they don’t see how they’re missing opportunities and leaving money on the table. They don’t see how, with a few tweaks they could provide even greater value and be compensated more as a result.

Mistake #3 — They’re Creating a Trap for Themselves

Most of the guys I see rarely consider the system their building and how it supports the income and spacious lifestyle they want.

They focus solely on making money and hope that the rest of it — the ability to have the free time and relationships they want — will all just magically take care of itself.

But it doesn’t happen that way. Instead, in their sole pursuit of money they create a system that has them working crazy hours, burns them out, and keeps them stuck on a professional plateau.

And being exhausted, burned out, and stuck is bad for business. It’s unsustainable which means their business will ultimately head down the toilet.

So even though these guys are on a flat trajectory — or worse, a downward slope — they’re wasting precious time hoping that something better will fall out of the sky and turn things around.

They approach the future of their business like it’s some kind of a hobby and hope that a book or podcast will help them make the change. They’re hoping that new information will lead to the lasting transformation they desire.

But as Fernando Flores said…

Hope is the raw material of losers.

Bottom line: they’re playing this game as amateurs. They refuse to invest in themselves, their family, and their future. They refuse to “turn pro” and bring in the structure that will have them show up as their most powerful selves — to consistently do the things that will make a lasting, positive difference.

Mistake #5 — They Let Themselves Get Isolated and Soft

These are the guys I see most often. They imagine they’re all alone, thinking they’re the only guy — out of billions of guys on the planet — dealing with their particular challenge.

Trapped in their boo-hoo-bubble, these guys waste energy, time, and resources trying to reinvent the wheel. Many are simply treading water waiting for a foolproof plan to come along.

And as a result they become their own worst enemy. Here’s how…

Reason #1 — They let their minds get small and narrow. The old thinking that got them to where they are isn’t going to help them get to where they want to go. Limited by this outdated mindset, they’re unable to see the opportunities that are right in front of them. They’re unable to see their blindspots. They’re stagnating. They’re falling behind, and they’re vulnerable to the guys who are hungry to make progress.

Reason #2 — They get soft. It’s been said that everything we want is just outside of our comfort zone, but these guys are quick to avoid anything that might make them uncomfortable. As a result these guys are losing ground because they’re hesitant to keep things fresh, to experiment, and find new ways to make progress.

And Reason #3 — They don’t follow through. They make lots of plans. Set lots of intentions. But they choose to spend their time putting out fires, “researching options”, and basically avoiding any consistent action that might make a real difference. There is nothing in their lives to hold them accountable.

This is why they continue on a downward trajectory. Nothing changes. Days turn to weeks, weeks turn to months, and months turn to years with no significant progress. The only thing this pattern reliably creates is chronic stress and anxiety. These guys are watching precious time slip away. And that’s no fun.

Authority: How to Align Your Work, Lifestyle, and Impact

I hope this has been helpful for you and thanks for listening.