Part 2: How Most Guys Give Up Their Power 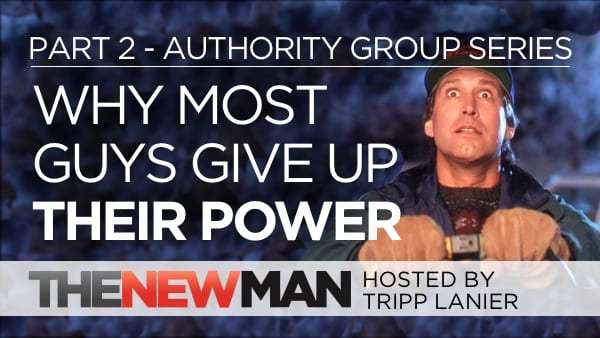 How Most Guys Give Up Their Power

This is part 2 in a short series where we’re learning why most guys stay stuck on some plateau in life and why a rare few are able to level up. This is all included in the Authority Group Coaching Program that starts in October. You can learn more by clicking here.

In this part of the series I’m going to talk about power. Plus: Why I almost quit my career as a coach. And why most guys will stay in lousy, draining situations no matter how hard they try to “get it right.”

So what do I mean by power?

A guy who is not owning his power is:

This guy is waiting for a magical time in the future when he’s able to show up as he is and do things the way he wants to do them. And he’ll go to the grave waiting for permission to do this. This is the type of guy that worries about whether or not he’s an alpha male — which is the least alpha male thing you can do.

And then there are guys who have learned how to own their power in a healthy way:

Here’s a little story about how I almost ended my coaching career because I wasn’t owning my power.

When I first started coaching, I wanted to quit. I didn’t realize it, but I was trying to play the role of the good coach. Each session my head was full of critical voices focusing on my performance. I was comparing myself to other coaches, and what I imagined they might say. Most importantly, I was afraid to say things because I didn’t want to rock the boat with my clients.

I would end the sessions feeling drained and exhausted and frustrated. I didn’t know it at the time, but I was hiding out. I was holding back my power. And it was incredibly draining.

I decided to quit.

And I decided that if I was going to quit then I may as well play full out. I may as well get fired for showing up how I wanted to show up. I wasn’t trying to burn anything down, I was just giving myself permission to bring myself into the session instead of who I thought I had to be in order to be the “good coach.”

I thought for sure I’d get fired or piss someone off. It was the opposite. My clients were thankful. The sessions got easier. I started having fun. It took me a while to realize that I was finding my true power by bringing all of who I was — my life experiences, my mistakes, my faults — into the work instead of worrying about “getting it right.” I was focused on doing what I believed would serve my clients, and they got far better service. Imagine that.

I made a commitment at that time that I still hold to this day:

To serve so deeply that I’m willing to be fired in any given session.

Playing it safe and playing the “good guy” was killing me, and it was killing my business. Stepping into and bringing my full power was edgy and risky, but it’s where my clients and I are best served.

The people I coach are making the same transition into their bigger selves. They’re confronting that limiting fear that says they have to fit into a box in order to be successful. And they’re finding greater opportunities and energy as a result.

These are the people who become authorities in their professional field. These are the folks who create marriages and relationships that support them in showing up as their full selves.

Why I Created the Authority Coaching Group

My Authority Coaching Group is designed to draw out what makes you most powerful so that you can make a difference and connect more easily to your tribe. No more hiding out. No more role playing. No more tolerating draining relationships or professional situations.

The group starts in just a few weeks and there are only 6 total seats available. You can click here to learn more information.

Stay tuned: In the next chapter we’re going to discuss why so many “busy” guys aren’t getting anything done.