Part 5: How to Tell if a Guy is Going to Fail 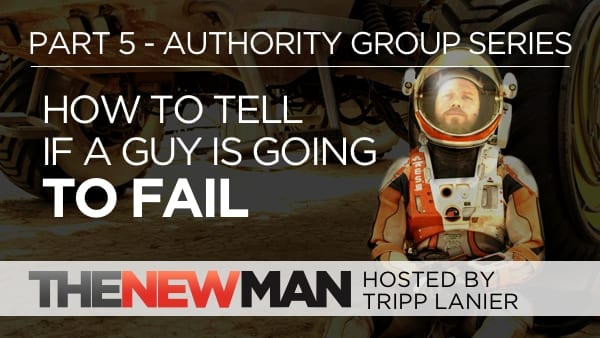 How to Tell if a Guy is Going to Fail

This is part 5 in a short series where we’re learning why most guys stay stuck on some plateau in life and why a rare few are able to level up. This is all included in the Authority Group Coaching Program that starts in October. You can learn more by clicking here.

I don’t know if you’re like me, but it’s easy for me to get isolated. Even though I have thousands of so called “friends” on Facebook, and I have powerful conversations with people everyday, it’s still really hard to find the folks that can support and challenge me to be at my best. I’m not talking about a guy to just go have a beer with. I’m talking about a brother — someone who really has my back. I have to put in consistent effort and time to build and maintain these relationships.

I know I’m not alone, but I find it amazing that some guys really think that they’re going to create their ideal profession and life all on their own. They really believe that they’re stronger by playing the lone wolf. And it’s easy to see how this mindset will doom a man to failure.

How Do You Spot a Lone Wolf?

I’m talking about the guy who:

The Power of Having a Pack

Now let’s look at the guy who is setting himself up for powerful growth:

How Living in a Bubble Was Making Me Weak

I took a chance and went on a men’s retreat in Costa Rica. And on that retreat I was challenged to start a men’s group back in the small town where I lived. I thought this would be impossible. I was convinced no one would want to join me.

I sacked up and started talking to the men I knew about joining a small men’s group. Some thought I was crazy, some just ignored me, and a few said “hell yes let’s do it.”

Showing up to these meetings had a powerful effect. Within a very short period of time my life changed for the better. I stopped telling the same old stories. Because I knew the other guys were going to hold me accountable to the things I said I was going to do — I stopped making excuses and followed through. Deep down, I no longer felt alone in my desire to grow and create a great life.

That was well over a decade ago, and since then I’ve participated in many groups and felt the empowerment that comes from being around other guys who were gutsy enough to stop settling and make positive changes in their lives. Their successes inspired me to lean into my edge even more. I’ve learned through experience that I’m at my best when I’ve got other powerful men in my life.

This shows up in other ways, too. Twice a week I do high intensity workouts with a group and I’m amazed at how much stronger I am. Left alone, I would work out at only a fraction of the intensity. But being with others helps me see that I have the strength and capacity and grit to do so much more.

This is why I’m leading the Authority Coaching Group again this year. It starts in October and there are only 6 total seats available. You can click here if you’d like to learn more.