Part 6: What I Learned from Being Really Bad at My Job 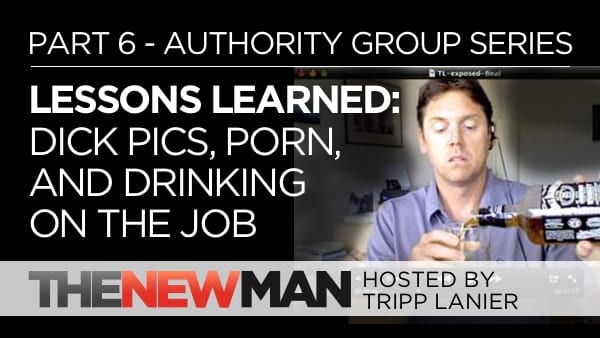 What I Learned from Being Really at My Job

This is part 6 in a short series where we’re learning why most guys stay stuck on some plateau in life and why a rare few are able to level up. This is all included in the Authority Group Coaching Program that starts in October. You can learn more by clicking here.

One of the superpowers that doesn’t get talked about in personal or business development is humor. And if I’m talking to someone who tells me they want to level up their profession or relationships, I know they’re going to stay stuck if they can’t take a joke.

I’m talking about the guys that believe they can’t have any fun until they’ve reached their goal. They’re rigid in their thinking which makes them fragile. They believe that if they have fun they’ll fall behind. Instead of having fun they spend their time being defensive or offended.

These are the type of guys that get up on a beautiful Saturday morning to go play golf and feel like throwing their clubs in the lake.

These guys are weakening themselves because they believe they need fear and high pressure in order to perform better. These guys live in a state of constant drain and deprivation.

And sadly these guys are such buzzkills because most of them have attached their sense of self worth to the outcome of whatever they’re doing. In other words — they believe that if they lose this particular challenge then they themselves are a loser. Talk about thinking small.

Then you have another set of guys who are able to get shit done and also bring a sense of play to their work. These are the guys that know how to make things seem more like a game. They’re willing to get over themselves and try different ideas. Because these guys are willing to experiment, they’re able to get out of their own way. They’re flexible and able to course correct quicker.

Most importantly, having fun means that they’re able to recharge. They’re not going to be depleted because they’re not counting on the finish line to revitalize their energy. They have learned how to stay rejuvenated while they move forward.

How I Almost Fell in to the No-Fun Trap

A few years ago I realized I was starting to take stuff too seriously. I was hosting a popular podcast, talking about serious stuff, and coaching guys to make significant changes in their lives. And I was starting to feel like shit inside. I had started to tell myself that I had to be all zipped up and professional.

I believed that if I joked around or had some fun that people wouldn’t take me seriously and I’d end up having to support my family by giving hand jobs in a Greyhound bus station bathroom. (No offense if that’s your idea of a cool career, but it wasn’t where I wanted to go.)

So I came up with this idea to do a video for April Fool’s Day. The concept for the video was that my computer’s internal video camera had been hacked and I would be exposed as a terrible, awful coach. People would see that I was coaching guys like Brett Favre and Anthony Weiner to send private pics to women. They’d see that I was drinking Jack Daniels and watching adult entertainment while coaching clients through emotionally trying situations.

I Had So Much Fun Making This Video.

And when April first rolled around I was scared to press publish. Personal development was supposed to be mature and serious and respectful. What was I thinking? Would anyone want to work with me after seeing these images of me being a total tool?

I was scared, but I pressed publish anyway. It turns out the video was a hit and it’s made me more powerful in several ways:

In fact, last year there was a guy who was on the fence about making the big commitment to join the Authority Coaching Group. He told me that before he mailed the check, he went online looking for reviews. He wanted reassurance that this was the right step for him. He said he googled around and found my April Fools video, laughed his ass off, and felt relief knowing that I was the right coach for him.

This Is Why I Created the Authority Group Coaching Program

If you’re interested in one of the 6 total seats available then click here to get more information.