Ryan Gosling the Pick Up Artist? Standing Out From the Crowd 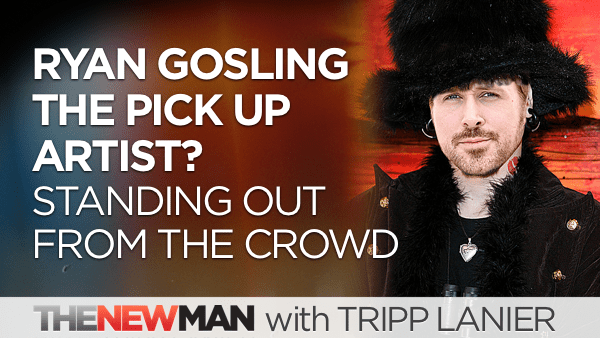 Ryan Gosling the Pick Up Artist? Standing Out From the Crowd

Today I’m going to talk about something that keeps guys playing small. It closes doors for them professionally. And it kills opportunities in every area of their lives.

But first, I want you to try to imagine something. Can you imagine Ryan Gosling as a pick up artist?

Do you know what I mean? Do you remember pick up artists? Years ago there were guys all around the world who were learning NLP and hypnosis and doing magic tricks and playing games and dressing like muppets just to get dates with women. These were guys who felt that they lacked the looks and natural charm and confidence to simply relate with women. They believed they needed to put on an act in order to be interesting. And in their mind, if they learned the system and “got it right” then women would give them what they wanted. The approach was more like playing a video game than relating with other human beings.

It sounds ridiculous but I see guys doing this professionally. Here’s what I mean — many if not most guys are playing some kind of a game professionally. They see their professional path as a process or a series of tests that they need to “get right” in order to succeed.

But this focus on playing a role and “getting it right” means that these guys just fit into the crowd. It means they abandon their strengths and the qualities that make them unique.

And while they may feel a bit safer by blending into the crowd, they abandon what would help them build genuine connections and trust. By striving to be ordinary, they cut themselves off from their ability to serve in an extraordinary way. And all of this means they cut themselves off from the thing that would make them way more successful than those guys dicking around in the crowd.

And this has a cost. Great guys get stuck doing lousy work. And great talent goes wasted. We all lose when guys hide their greatness and uniqueness.

There are a many, many Ryan Gosling’s out there putting on costumes and playing a role in order to be successful. But little do they realize that they’re weakening themselves by “getting it right” or taking an approach which seems safe. They look around and see a bunch of other guys suffering and figure this is just the way things are.

But what happens when you look in the mirror and embrace who you are, what you have to offer, and where you’re most effective?

You may find that you don’t “fit in” with the rest of the followers.

You may find out that you’re actually a leader instead of a follower.

You’ll also find that the path to create what you truly want may be a lot shorter and more enjoyable — especially when you stop trying to do it like everyone else.

Bottom line: Surround yourself with people who see your power and your unique gifts. This could be a coach, a men’s group, a coaching group, whatever. Sometimes our friends aren’t the best challengers because they can get uncomfortable if you want to change and grow.

Instead, find people that are going to give you a hard time if you try to play small. Create an environment for yourself that challenges you to stay awake, be bold, and utilize the strengths you already have.

Here’s to you busting out of that silly game and being bold. Thanks for listening.