Motivation Hacks: Why Passion is Overrated

Tripp Lanier+ by | Everything Else, Fitness & The Body, Money & Career, Purpose & Mindset, Videos 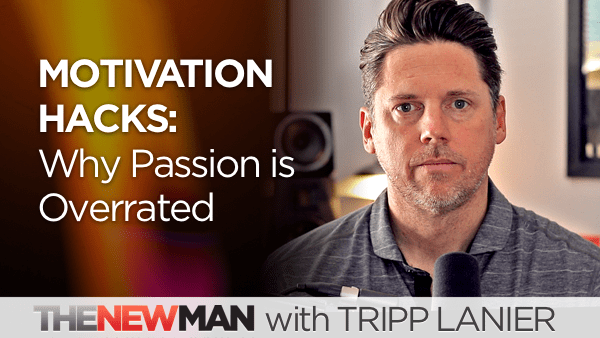 Motivation Hacks: Why Passion is Overrated

Today let’s talk about a myth that keeps so many of us stuck. We say we are tired of feeling stuck. We say we have this vision to make a big change — maybe it’s changing lanes professionally into something that’s more aligned with what excites you. Maybe it’s a positive shift in your relationships.

Regardless, the myth says that we have to be passionate, we have to be full of desire before we can start the process. And whoever believes this ends up sitting around waiting for passion and desire to show up. Meanwhile time tick ticks away and opportunity is lost.

Recently I was on a coaching one of the members of my group program. He was in real estate and was feeling trapped in his current situation. So he wanted to split off and start his own real estate investment business. Time was passing, nothing was getting done, and so he was basically laying out his little sob story that he was stuck because he wasn’t fired up.

So I asked him, “What would you do if you already had that burning desire?” And he responded with a very clear set of actions that something to do with drawing up paperwork to form his own company, make some contacts to line up funding, etc.

Deep down this guy had a knowing — he was clear that he wanted to make this shift in his life, and he was simply scared. And that fear has a way of throwing water on any fire we may have.

Waiting for that fire to show up, waiting for confidence to show up is a huge mistake. The process doesn’t work like that.

We build the fire as we go. We build passion and confidence as we engage the challenge.

Stop waiting for the fire. Go build it.