Anxiety: If You Don’t Want Anxiety Then Attack 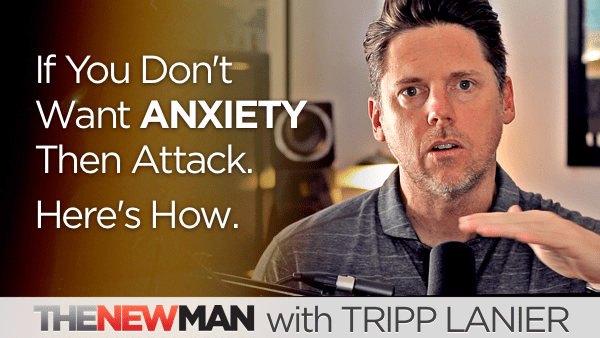 Anxiety: If You Don’t Want Anxiety Then Attack

If you’re feeling stressed out, let’s talk about a quick way to create some ease while gaining a ton of power and energy. It just may not be the way you’d think it should be.

A while back I had a guy who was interested in working with me on the phone. He made gobs of money but he was super stressed out and miserable.

And he basically asked me, “So, uh, Tripp. How can you help me tolerate more bullshit from all of these assholes I gotta deal with at work?”
I told him I wasn’t going help him tolerate anything.

But I did let him know I’d be happy to help him if he wanted to sack up, set some boundaries, or get a new job.

Typically when we are stressed we respond with wanting to tolerate or avoid. And if we’re still feeling like crap we often think we just need to get better at tolerating or avoiding.

In that moment I want to help him clarify what he wants underneath all of that fear and stress. So I’ll ask him, “What outcome would you want if you knew it could be painless and it wouldn’t hurt anyone else?”

Often there’s a very quick answer. Underneath the fear they have a deep knowing of WHAT they want. Their struggle is in the HOW or the process of getting there.

From their current perspective they don’t see a way through this that won’t be painful or uncomfortable or scary. Which makes total sense. But instead of getting stuck here — what if that pain was the thing that would set us free?

One of my coaches, Phil Stutz has taught me this idea. Check out my interviews with him on The New Man or pick up his books with Barry Michels.

I’ve got a window right here in my office and in the summer time there’s all kinds of critters hanging out there. And sometimes I get to watch this lizard do his thing. A bug comes along and BAM! He doesn’t wait, he doesn’t debate. He attacks. Why? Because for him that bug is sustenance – it’s life force.

So what’s the big takeaway?

There’s a Buddhist quote that says, “Pain is inevitable but suffering is optional.” This is what I’m pointing to. Suffering comes from avoiding and tolerating.

And then attack. Take action. Do it quickly.

Perhaps that action is asking for help in how to deal with someone you care about. Perhaps it’s making a bold request at work. Chances are you know what to do, and if you don’t then quickly make that bold action to get help.

This isn’t about being impulsive or careless. It’s about responding quickly to the deep knowing that we already have. The relief you’re seeking is on the other side of this action. Move into the fear and you’ll find ease, power, and life force.

Here’s to you owning what you want. Thanks for listening.