The Inner Critic and Self Love: How to Be an Ally to Yourself

Tripp Lanier+ by | Everything Else, Podcast Episodes, Purpose & Mindset, Videos 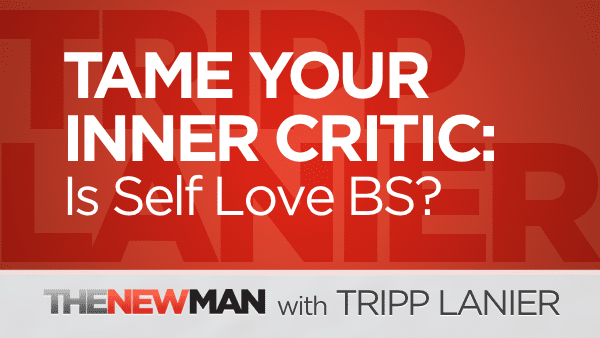 The Inner Critic and Self Love: How to Be an Ally to Yourself

If you’re like me you’ve probably got a voice in your head that just loves to beat up on yourself. It doesn’t seem to matter what you’ve accomplished, this voice still finds a way to exploit the places where we’re not enough.

The really sad thing is that I’ve experienced some great moments in my life, and this voice will be the thing — if I let it — to rob me of the joy and love in those moments. And I’m certainly not alone. I see this a lot. I’ve worked with some people that others may consider to be very successful who are haunted by this inner critic that never allows them to enjoy their lives.

Some folks are so hypnotized by this voice that they’re proud of this part of themselves that makes them miserable. They’re proud of the long hours and the endless amounts of bullshit and drama and self neglect they tolerate. They wear it like a badge of honor until they’re exhausted and wondering why they feel so empty and miserable. In fact, I would wager that most of the folks we put on a pedestal are haunted by this voice and a never-ending need to prove that they’re enough.

The voice tells us that the only way we’ll be happy is to constantly do more, be better, look better — you name it. In other words, it has us believe that who we are now is unacceptable but — and this is a big but — someday in the future we could be. We really believe there’s a point when this voice will surrender and say, “Yes! You’ve done it! You’re finally worthy of love and acceptance and peace and freedom!”

Which is bullshit. It’s a trap. No matter what we accomplish or how we look or what we can afford, this part of us will never be satisfied. The inner critic’s sole purpose for existing is to find shit to criticize. And he’s not going to retire any time soon. We’re always going to have an inner critic, so the opportunity here is to learn how to keep him in check.

I had the pleasure of coaching Kamal Ravikant a while back. He wrote a wonderful book call Love Yourself Like Your Life Depends On It. In the book he reveals the process he went through as one of his businesses failed and he was overcome with self doubt and criticism. And then he talks about how he found his power and mojo by simply acknowledging that underneath all of that self criticism, he actually loved himself. He would repeat the statement, “I love myself” over and over and over again throughout the day. And this practice helped him keep the self critic out of the driver’s seat of his life and work.

Now, I’ve shared this story with my clients many times and I inevitably get the “Yeah, okay. Right” treatment. So many of us have so much resistance to this simple statement of “I love myself”. I struggle to maintain this practice even though it’s so simple.

So let’s pivot. Let’s ask ourselves, “What would I do if I was an ally to myself?” This doesn’t ask us to believe anything. It simply means that we zero in on the choices we’re making so that we can be an ally instead of an enemy.

Being an ally means we know we have flaws and shortcomings. Being an ally doesn’t mean we overlook these things. It simply means we deal with it and move on instead of turning it into another reason to stick a knife in our own back.

And I also want to name that we have to be careful not to turn this practice into yet another reason to beat ourselves up. “Dammit! I’m not being an ally to myself! I’m such a loser!”

I’ve found the best approach is to find the humor in this craziness and simply get back to doing what an ally would do.

Now just watching this video isn’t going to make the change. You’ve gotta practice this daily if you want a different experience. Start small. Commit to an hour of treating yourself like an ally. Then commit to a day. If you fail, no big deal. Find the humor, and just get back in the game.

That’s the process. It’s not easy. But it is possible.