Why Tough Guys Make it Hard to Solve Problems 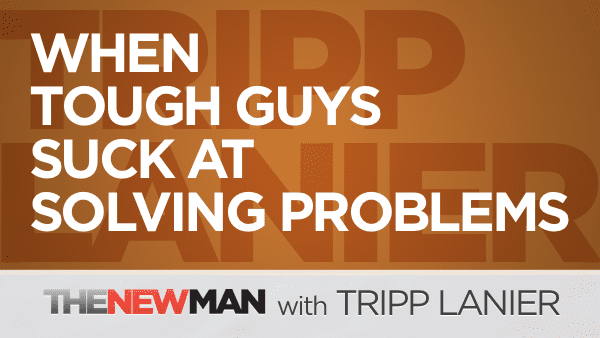 Why Tough Guys Make it Hard to Solve Problems

Let’s talk about tough guys and this amazing ability we have to make our problems more complex and unique than they really are.

In case you don’t know who I am, I’m Tripp Lanier. For over 12 years I’ve spent thousands of hours coaching folks to get out of the rat race, become an authority in their field, and make a great living doing the work they were put on this earth to do. And for more than a decade, I’ve hosted The New Man Podcast which has been downloaded millions of times and can be found on iTunes or Stitcher.

And for what I’m about to say, keep whatever works for you and discard the rest.

I love my Dad. And he’s got an interesting resume which includes serving as a Marine in Vietnam, being a cop for more than 20 years, and even being a former cowboy as a teenager. I grew up heavily influenced by him and his buddies which were all pretty interesting guys. These were some pretty tough guys.

But if you’re like me, from time to time we may go through a rough patch — and instead of asking for help, we want to isolate ourselves like a wounded animal. Some folks think this isolating behavior is manly — whatever that means. Some folks think that it makes us tough to go it alone, to keep our challenges locked inside and private.

But even though I have a tendency to pull this move from time to time, it’s not tough. It’s bullshit.

Think of it this way: If we had our family in a car that was limping along out in the middle of nowhere at night would we say, “Ahh, nothing’s really wrong. It just keeps stalling, and it’s something I’m thinking about a lot, and it’s getting in the way of me doing important things in my life. But it’s no big deal though. I’m good.”

No, unless you’re a certifiable ass-hat, you make a call and you get your car fixed.

So if we really value the quality of our life, if we truly want to be powerful then we apply this same thinking to our other challenges. We get over ourselves, we get out of our own way, and we get help when it’s time to get help. We don’t lie to ourselves and act like nothing’s wrong. We don’t waste time and resources. We steer directly into the challenge and ask, “What’s the problem here and what’s going to solve it? Better yet, who has already done this and how can I leverage that person’s expertise to solve it faster?”

Easier said than done, right? This is because our crafty fears can convince us that we can’t be helped. And as I mentioned, I’m really good at doing this which is why I continue to work with coaches and folks who challenge my thinking.

So here’s an example from a recent interaction I had with a coaching client:
On the call my client was talking about a challenge in his business, and as he talked he began to sound like he was the only guy on the planet with this challenge. And on top of that he was the first guy to deal with it. So, in a loving way I gave him some shit — which I’m known to do from time to time.

I said, “I think it’s really amazing that you’re the first guy, in fact the only guy in your entire industry to be dealing with this problem. I imagine that the rest of the folks who do this work are all sitting there anxiously watching you, wondering how you’re going to figure this all out on your own. They’re probably live tweeting this as we speak.”

He said, “Why don’t I just look around and see who else has figured this out?”

He was silent for a moment and said, “You mean it’s that easy?”

And that was it. That was all he needed. In that moment he pivoted out of his soap opera and found the resources needed to course correct and get his business back on track.

But many of us can stay stuck in that false complexity and uniqueness for years. Why? Because if my problems are complex then it makes it harder for me to do anything about it. If my problem is complex then I can’t just make a phone call and ask for help. I can’t just do a google search and see who’s already figured this thing out. And if I can’t take action then that means I don’t have to take a risk.

Avoiding risk means I get to stay safe — even if I’m stuck in a shitty car out in the middle of nowhere.

And here’s the real reason why we act like an ass-hat when we’re facing a challenge: It’s vulnerable to get help. It means we have to reveal to ourselves that we’ve got a problem. We may even have to admit this to someone else, too. What if we’re judged? And if we actually got help then that means our lives may change.

Who knows what may happen then?

But — and here’s where our fears have us play small — if I can’t be helped because my problem is so complex and special, then I don’t have to feel revealed. I can continue to hide out like a wounded animal instead.

And that’s what most of us are doing. When we hide out we’re not being tough. We’re avoiding that vulnerability by making our problems so complex and so unique that we can’t be helped. This is how we maintain an illusion of safety at the cost of pissing away opportunities and resources.

This song and dance is just another form of resistance. It’s just fear seducing us to believe in an illusion of safety. And it’s a recipe for chronic misery.

Running the life or the business or the marriage of a man is not a job for a child. It’s the job of an adult — one of the rare, bold, badass guys who gets over himself and focuses on what will help him be most effective.

I like to say, “Life’s a lot easier when we get over ourselves.” And I say it a lot because I’m one of the guys who needs to be reminded — a lot.

So take a minute to make a list of the top 3 challenges in your life. They could be in your business, in your health, in your family or marriage. Write them down, and now write down your excuses for not getting professional help. And now consider the possibility that your excuses are just your fears trying to keep you exactly where you are. What if the solutions are actually very simple — even if they required you to be bold? What would be possible if you were willing to get out of your own way?

I hope this has been helpful for you. Here’s to all of us living with greater freedom, aliveness, peace, and love. Thanks for watching.