Success or Failure – Why Most Guys Will Fail 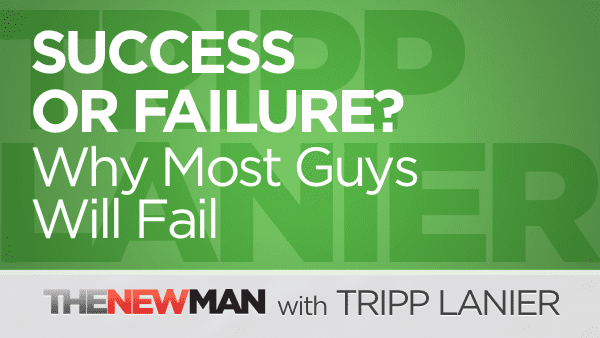 Success or Failure – Why Most Guys Will Fail

Today we’re going to talk about why certain men and women are able to do amazing things in their lives and why most will not.

In case you don’t know who I am, I’m Tripp Lanier. For over 12 years I’ve spent thousands of hours coaching folks to get out of the rat race, become an authority in their field, and make a great living doing the work they were put on this earth to do. And for more than a decade, I’ve hosted The New Man Podcast which has been downloaded millions of times and can be found on iTunes or Stitcher.

And for what I’m about to say, keep whatever works for you and discard the rest.
As someone who has coached so many folks, I’ve heard lots of excuses for why we fall short on the things we say we want to create. This could show up in our businesses, our family, our marriage. Doesn’t matter.

Let’s talk about commitment. I’m always intrigued to hear people say they’re willing to do whatever it takes to make something happen because it’s so rarely true. It’s rare to find true commitment.

I believe what’s more true is that we’re willing to do whatever it takes with conditions. These conditions are usually unspoken, and it’s these conditions that reveal what we’re truly committed to.

Now I want to be clear, I’m not saying we need to become bloodthirsty tyrants in order to create the life and business we want.

I’m saying that many times we’re unaware of what Robert Kegan calls our ‘competing commitment’. If we don’t own these unspoken conditions, then they’re always going to have power over us. We’ll remain unaware of why we’re sabotaging ourselves.

But by bringing this competing commitment into view, we can begin to challenge the fears and assumptions that keep us from making progress.

Here are some examples just from some of the guys I’ve worked with:

Another guy said he wanted help building his business, but he never seemed to accept any help. We found out that deep down, he was more committed to being the smartest guy in the room, the guy who had all the answers. Just imagine how limiting it is to build a business while also defending this idea that you don’t need help from anyone. So in his world, he was willing to do whatever it took unless it challenged his identity that he was the smartest guy in the room.

This is what I meant when I said that the thing holding us back is between our ears. It’s not about resources or information. It’s our unspoken fears. It’s our small selves. Many times it’s about our self-image. And it’s a natural part of being a human. It’s part of the wiring.

But when we’re unconscious of this stuff we stay stuck in a defensive position. Instead of playing for what we want we end up playing not to lose. So consider the idea that when it comes to this self-image stuff, wherever we defend is where we lose power. As I’ve said before, “Life’s a lot more fun when you get over yourself.”

Having this awareness keeps us from making excuses, it keeps us from playing the victim. It pulls us out of a defensive position and has us play for what we truly want.

I hope this has been helpful for you. Here’s to all of us living with greater freedom, aliveness, peace, and love. Thanks for watching.