Mindset for Success – Will F-You Money Slay Your Dragons? 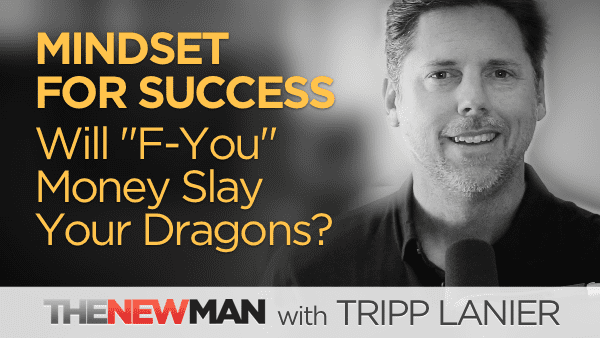 Entrepreneur Mindset for Success – Will F-You Money Solve Your Problems?

Today let’s talk about dragons, “F you money”, and a mindset that keeps us weak.

Recently I was on a call with a client who I’ve been working with for about a year and a half to make a professional transition. He’s changing the type of work he’s doing. And if we were to measure his progress it’s been amazing. He’s erased tens of thousands of dollars of debt. Less than two years in, he’s earning more than double of what he made before we started working together. He’s working fewer hours, and he’s loving his work because he’s spending his time helping people that are building exciting new startups.

Well while he was certainly excited by this progress, he was far from feeling peaceful. This was because in his mind, he had believed that if he got to a certain level of success then he would be able to escape the ups and downs and fears and uncertainties of working for himself. In other words, he was upset because he hadn’t completely escaped some of the problems or dragons he’d experienced years ago.

As we talked he said, “I just thought if I got to this point I wouldn’t have to deal with anymore dragons. And yet, they keep coming. How hard do I have to work so that the dragons stop coming? What do I have to do?”

Let’s talk about what’s going on here. Let’s imagine for the sake of this conversation that there are two ways to orient towards life:

The first belief says something like, “If I make enough money or attain a certain status or XYZ, I won’t have to deal with uncertainty or the roller coaster of life anymore.”

One of my coaches, Phil Stutz calls this fantasy exoneration. As in, we’re going to finally get to some place in our lives where we’ll be exonerated from life’s scariness and bullshit. This fantasy has us imagine that there’s some velvet rope section of life where we’ll be protected from uncertainty, pain, and effort. And if you think about it, that’s the illusion we’re confronted with daily — buy this product, have this body, attain “F you money”, or become important and all of our struggles will disappear. We can live in peace.

But this isn’t reality. It’s not been true in my life or the hundreds of people I’ve coached. And just listen to my interviews with Phil Stutz and Barry Michels and you’ll hear two guys who have worked with billionaires and some of the most powerful people in the world. The ones who seemingly have it all. What have they discovered? That the folks at the top of the mountain still have dragons, too. Imagine that.

Bottom line, there is no escape from the dragons. They may be fewer, they may be different. They may attack your health, your relationships, your finances — doesn’t matter. They’re still gonna keep coming in some way, shape, or form until we die. That’s just life.

And what my client was experiencing wasn’t that his life was shitty. It was far from shitty. He was experiencing the frustration and the letdown that this fantasy had created. His stress and suffering didn’t come from the dragons themselves. They came from this belief that they shouldn’t be there in the first place.

So this leads me to the second way we can orient towards life which is to (1) play big and create what we want and (2) understand that we’re still going to get some dragons from time to time and (3) remember that the dragons are rarely as bad as we make them out to be.

When we live from this place, we don’t get caught up in the fantasy that we just need to make more money or have more shit or be more significant in order to escape the dragons of life. Instead of trying to outrun our problems we focus on what we want. We play big by creating what has us experience more genuine freedom, aliveness, peace, and love.

And when the possibility of a dragon rears its head we challenge the very idea that we’re at risk. We ask ourselves, “Is it really true that this challenge is really that big of a deal?”

Instead of getting hijacked by that young, fearful part of our psyche that believes there’s a dragon under the bed, we get a flash light and go take a look. And when we do look, often we realize (a) there is no dragon or (b) the dragon isn’t that big of a deal. In other words, we’re wasting precious time and energy, we’re giving our peace of mind away to things that just aren’t that big of a deal.

Now here’s the kicker: What if instead of exhausting ourselves by trying to escape all of life’s uncertainties and problems we took a look at our track record and remembered all of the dragon asses we’ve already kicked? What if we remembered that we weren’t so fragile?
What if we could remember all that we’ve done and say, “I can handle the dragons if they come. I’ve done it before.”

This is how we find peace — It’s not in the hope that one day the dragons will stop coming. It’s in knowing that when they do come that we have the experience and skills to slay them again – just like we’ve done before.

My hope is that by remembering how powerful we already are, we may find that the peace and freedom and aliveness and love we most want is much closer than we may have previously thought.

This stance will allow us to enjoy what we’ve got right now instead of fixating on a time or scenario that will never come.

I hope this has been helpful. Here’s to you experiencing greater freedom, aliveness, peace, and love. Thanks for watching.