Tripp Lanier+ by | Everything Else, Purpose & Mindset, Relationships & Sex, Videos 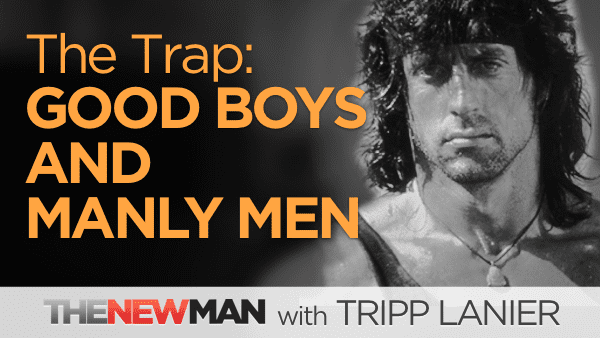 Ok. Good boys and manly men. Several times a year I get invited to share my thoughts on some podcast or summit about quote being a man. As if there’s this one unifying principle about what makes a quote real man and what a quote real man should do.

I typically ignore these invitations, and here’s why: It’s a trap. This whole idea of being a quote real man is just another form of domestication.

Let me explain domestication, and I’ll point you to don Miguel Ruiz if you want to learn more. So domestication happens to all of us. It’s not all bad or all wrong. But it’s the process we go through as we grow up to learn how to be safe and accepted and comfortable in the world. That’s not so bad.

However when we become too domesticated we’re essentially playing a role. It’s bad news when we’re striving to become an image in our head instead of accepting who we really are. Cue anxiety and depression.

Now the only guys I know who are concerned about this idea of manliness are the ones who are recovering “good guys”. But what they don’t realize is that seeking “manliness” is just another form of domestication. It’s simply the flip side of the same coin where we strive to meet the expectations of others in order to be accepted. And that’s what makes it a trap.

Let’s come back to our “good guy” who’s now frustrated and exhausted from spending his life thus far doing what he’s been told in order to meet the expectations of others. He’s tired of giving his balls and his power to his mother or his wife or his boss or someone else. He feels shame about being neutered, so in a moment of genius he decides that being “manly” is the answer. He says, “If I was a ‘real man’ then I wouldn’t have to deal with this crap anymore.”
He gets on the internet and looks up how to be manly and there’s a lot of information out there because folks are lining up to express their expectations for what a quote real man should be.

And our good guy says, “Great! I’m good at following the rules! I’ve spent my entire life practicing how to meet someone else’s expectations! I can do this!”

But what our good guy doesn’t realize is that he’s still striving to meet someone’s expectations. He’s just shifted what those expectations are. He’s still playing someone else’s game. He’s not playing his own game.

My belief is that the deep work, the true work involves letting go of the “tell me what to do” impulse, and learn to cultivate a connection to ourselves. Instead of looking to others, to some external authority, to determine what we should do and how we should act, we slow down and practice asking ourselves many times a day:

And when we learn to live and act from what I call our inner authority we may find that we don’t match up with someone else’s expectations for what a good guy or a quote real man should be.

On an essential level, we may find that we’re not “manly” according to someone else’s criteria. We’ll experience the tension that arises when we choose to align our lives with what truly matters instead of striving to keep the peace.

That can be scary as hell. Contorting who we are to be the “good guy” or the “manly” guy is just a shell. It’s a defense so that we don’t have to experience that tension or fear.

And that’s why it takes real guts and real balls to own who we are and walk that in the world.

Here’s to you playing your own game. Here’s to all of us living with greater freedom, aliveness, peace, and love. Thanks for watching.