Personal Growth Jackass – How to Tell if Optimization is a Distraction 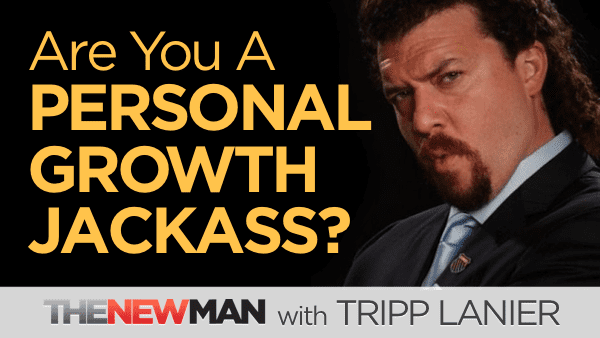 Self Development: How to Tell if Optimization Has You Playing Small

Today I want to talk to you about the personal growth jackass. It’s a trap I see certain guys falling into whenever they get fired up about exercise, diet, meditation, and personal growth stuff.

Our guy has been living life a certain way. Maybe he’s gotten overweight. He’s been in a dead-end relationship but he’s been too scared to get out. His work schedule has him feeling too tired and uninspired to do anything interesting with his free time. He’s on a lousy trajectory, and he’s bummed because he thought he would be on a different trajectory at this point in his life. Sound familiar?

And then one day something shifts. Maybe he hears a podcast, watches a video, goes to some event and BAM! now he’s fired up to make some changes.

He’s researching when and how to eat. How to exercise so he can maximize his effort. How to meditate the best way. He gets to work and starts to make some changes. He’s devouring information. He’s an optimization rock star.

Now the good news is that he’s looking different and feeling better. But he’s also starting to get lost in all the effort to optimize himself. This is where our guy can easily fall into a trap when he allows the practices themselves to become the focus of his life.

I think Kenny Powers may have said it best:

Kenny Powers
“I play real sports. Not trying to be the best at exercising.”

You see, the personal growth jackass loses site of the purpose for all this growth, the reason why we tune our bodies and our mindset.

The personal growth jackass makes optimization a performance — look at how well I’m meditating and working out! Look at how many books I’ve read! Look at how much I’m doing!

His life becomes about the growth instead of having the growth be in service of the life he wants.

Here’s an example: I was coaching a guy who loved to tell me about his exercise routines. How he had optimized his diet so that he was ketogenic. How he was meditating with the latest heart rate variability technology. He would tell me how he would listen to audiobooks and podcasts at 2 X speed — and he was devouring multiple books at a time.

But here’s the deal: When it came to his life, his biggest stressors were at his business and in his relationships. He was muting his own wants and needs to keep the peace. He was out of touch with what he really wanted to create with his life.

In a way, he was still stuck on that flat, lousy trajectory I mentioned earlier. Except now he looked like he was more powerful. But that’s just it — he wasn’t applying that power to where it really mattered yet.

This is why it’s critical to have a mission that’s bigger than simply growth. When we choose a mission that matters to our lives then we can exercise and meditate and devour information with a sense of meaning. “I’m doing this stuff because it’s empowering me to create XYZ in my life.”

Growth is great, but I want to make sure we find a mission that’s worthy of our time and our energy. I don’t want growth to become a distraction from creating the experiences we most want in our lives.

Here’s to playing a big game and not just being good at exercising.