Overcome the Fear of Failure – You’re Not a Big Deal 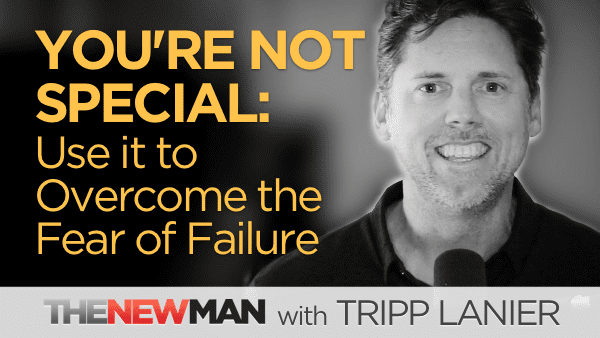 Fear of Failure – You’re Not a Big Deal

Today let’s talk about why you’re not that important. And why that’s a good thing.

When I’m working with a coaching client, many times the thing that is holding him back from creating what he truly wants isn’t a lack of information or even a lack of resources. It’s just fear — what many point to as a fear of failure.

In our modern, first-world lives that’s not the kind of failure we’re really dealing with. What’s far more likely is that we’re afraid of looking like a failure — to themselves and to the people in their lives.

And because this fear of damaging our self-image is there, we’re not too excited to take risks, to go through the suck of learning something new, of trying things and screwing up.

And this has a huge cost over the quality of our lives. It means that we hold back. Convinced of our self-importance and preciousness, we play it safe. We hide out. And this posture of “playing not to lose” means we will never get what we truly want in life. This doesn’t make us strong. It makes us fragile.

Now, everyone wants to feel safe. Everyone wants some level of comfort. Absolutely. There’s no problem there. But the thing we need to watch out for is this belief that when our self-image is threatened, then that means our survival is threatened.

Think about it, the metrics for anxiety and depression in our culture are insane. And for many it’s not because our survival is at stake. It’s because we’ve convinced ourselves that who we are and what we’re doing is such a big deal. We believe our self-image is being threatened. We’ve convinced ourselves that a threat to our self-image is a threat to our ability to live. This has us take things way too seriously. It has us over-prioritize and over-emphasize our need to be important and outstanding. It’s all a defense of the small self, the ego, the part in us that believes it needs to be special and different and significant in order to feel safe and comfortable and loved.

But what if we really weren’t that big of a deal?

If we’re going to challenge this idea that our identity and self-image aren’t that big of a deal then let’s talk about what is. Let’s put things into perspective.

When we think of big — and I mean really big — we usually think of the sun. It’s massive right? In fact, you could fit 1.3 million Earths inside of the sun.

But according to astronomer and scientist Michelle Thaler, if you were to reduce the size of the sun down to the size of the dot in the letter “i” on a page — that tiny ass little dot — if you made the sun that big, then the relative size of our galaxy, the Milky Way, would be the size of the Earth.

But let’s not stop there. A while back astronomers found a tiny section of the night sky that seemed to be empty. And tiny means the size of the head of a pin if you held it out at arm’s length. Hold that tiny pin head up to the sky and that little portion of the sky was empty. So they focused the Hubble Telescope up there and let it absorb light for a whole month.

And in that tiny, tiny part of the night sky that looked completely empty they found 5,000 galaxies.

So what does this all mean? You, me, all of us — our daily crises and dramas and getting pissed off because the barista forgot to put 2% soy vegan dick sprinkles in our lattes — when we can integrate this massive universe perspective, we start to see that no matter what we are thinking or doing, it’s really just not that big of a deal.

So does that mean we should just give up? That life is meaningless? What do we play for if it’s really just going to be infinitely small?

Maybe you’re watching this, and maybe you feel a little deflated. Now consider that maybe that’s the part of you that thinks it needs to be important or outstanding or a big deal or significant in order to feel joy or fulfillment. I can get it.

Instead of getting all precious and fragile, instead of holding back or hiding out, we can lean in and create what we truly want in the short time we have to be alive. We don’t have to attach our well-being to how well we measure up to others or how well we meet the expectations of others. We can let go of fixating on the outcomes and instead focus on the experiences of meaning, purpose, flow, freedom, aliveness, peace, and love that we most want.

It’s a paradox — to play full out without being attached to the outcome. It’s way easier said than done. And I’m not going to bullshit you and act like I’m somehow enlightened and able to do this all the time. But if we look around we see it happening all around us. We can find little reminders to help us stay on track. Let’s use sports for example.

I’m not a huge football fan, but if you watch a game on Sunday you’ll see guys fighting like gladiators. Blood, sweat, tears. They play so hard that they injure their bodies and even their brains. The clock winds down to zero, the ref blows a whistle and the game is over. Some of these gladiators shake hands and hug or smack each other on the ass or even pray together when just moments ago they were seemingly trying to cripple one another.

It seems crazy right? But it’s not because it’s just a game. It’s only crazy if we lose the big perspective. If we lose our ability to see that it’s just a game then we get played by the game.

Well, what if our lives weren’t so different? The arbitrary clock of our lives is going to run down to zero before we know it. And we have a choice. Are we going to play the game full out and enjoy the privilege and the opportunity to live? Or are we going to be played by the game?

We don’t have to get lost in the process. We don’t have to forget where we and everything we care about fits into the giant, universal, mysterious grand scheme of things. We can use it to help us live more fully and freely.

I hope this perspective has been helpful for you. Here’s to all of us living with greater freedom, aliveness, peace, and love.