Leadership Skills – Nearly Pissing Away Millions Because of Fear 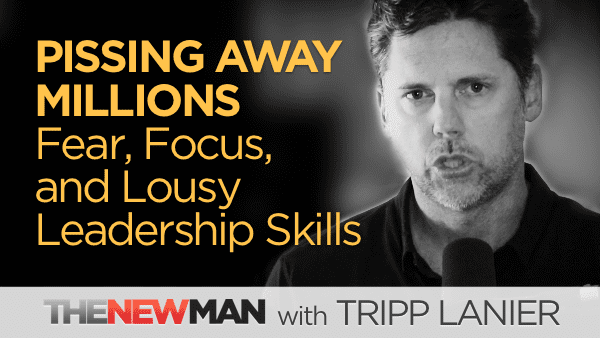 Fear of Success – Nearly Pissing Away Millions Because of Fear

Today I want to tell you about a client who was on track to piss away millions of dollars because he was scared and had his head up his ass.

So one day my client shows up on the call and says, “I’m burned out. I’m toast. And I don’t know what to do about it.”

Now these were not the words of a corporate wage slave dreaming of owning his own company and selling it for millions one day.

These were the actual words of a guy who was going to sell his own company for millions in a matter of days.

Let’s call him Tom even though that’s not his real name. Tom had built this company as a kid in his early twenties. At the time he started the business he had about $75 in his pocket.

For years he put his head down, created amazing growth, and now in his mid-thirties he was going to sell his baby and set his family up for the good life.

Or so it would seem. In reality, this sale and the transition was bringing up a lot of fear.

He had a buyer and as part of the deal he would stay on board to run the company for a few years. At the end of that time he would move on and be rewarded very handsomely for its continued growth.

He was still young. He could build and sell many more companies in his lifetime. He had a wide open road ahead. The future was bright, right?

Not so much. Stuck in his fear and uncertainty, Tom was driving himself straight into a wall. Instead of focusing on the value of his leadership and vision, he was approaching this opportunity as that scared kid who was afraid to lose $75. All he could see were the things that could go wrong, all the ways this deal might go tits up. He was scratching and clawing trying to control and manage everything. He no longer trusted his team or the systems that allowed the company to grow so well over the years. He was playing not to lose instead of focusing on where he wanted to go.

Instead of being the asset that would usher in a greater level of growth, he was becoming a liability to the company, the buyer, and the employees he cared for. If he stayed stuck in this fear-based perspective he was going to burnout and piss it all away.

So after a bit of back and forth he asked me, “What the hell is going on? Why are things like this?”

I told him, “You’re not thinking big enough.”

I challenged him to shift into a higher perspective. I invited him to consider that one of the reasons his company was so valuable was because of his ability to create a vision and lead. It’s just that right now fear was having him play small. Fear was keeping him away from where he was most valuable. Fear had him trying to control and manage everything and everybody.

So I asked him, “How would you navigate this sale and transition if you weren’t afraid?”

The switch had flipped. He saw it. The perspective had shifted. “I know exactly what to do now,” he said. We began to clarify the bold actions he would take and what he would do to run his business as the seasoned adult instead of a scared kid.

As a result of our coaching he was more aware of how and where fear was driving him. His job was to lead, to hold the big picture, and he realized he can’t do that if he’s focused solely on all the ways things can go wrong.

We may look at the guys at the leadership level as having super powers. That somehow they’re immune to the fear or doubt the rest of us feel. It’s not true. Tom was just smart enough to have a coach and a system in place to make sure fear didn’t get the best of him.

We all get scared, but it doesn’t mean we have to create our lives or businesses from that small place.

So who is leading your company or your life or your marriage? Is it the adult focused on what is possible? Or the scared little kid playing not to lose?

Here’s to all of us experiencing greater freedom, aliveness, peace, and love. Thanks for watching.