225 How to Stop Coddling Yourself and Others – Jonathan Haidt 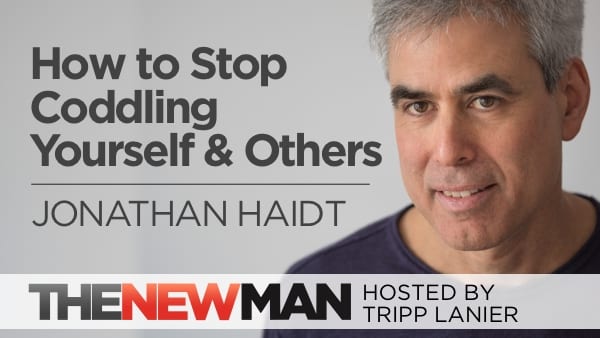 Jonathan Haidt – The Coddling of the American Mind

Do you think your choices and actions are logical?

How much do the people around you influence how you live?

And how are our good intentions making us fragile?

Social Psychologist and best-selling author Jonathan Haidt writes books that help us understand why we do some of the wacky things we do. Today we’re going to talk about why good behaviors are so hard to stick, why we’re so concerned about what others think of us, and why the folks who appear to be standing up for others are probably just trying to make themselves look good.

Click here for Jonathan Haidt’s book The Coddling of the American Mind: How Good Intentions and Bad Ideas Are Setting Up a Generation for Failure.

Jonathan Haidt is a social psychologist at New York University’s Stern School of Business. He received his Ph.D. from the University of Pennsylvania in 1992, and taught for 16 years in the department of psychology at the University of Virginia
​
Haidt’s research examines the intuitive foundations of morality, and how morality varies across cultures––including the cultures of progressive, conservatives, and libertarians. His goal is to help people understand each other, live and work near each other, and even learn from each other despite their moral differences. Haidt has co-founded a variety of organizations and collaborations that apply moral and social psychology toward that end, including HeterodoxAcademy.org, OpenMindPlatform.org, and CivilPolitics.org.

Haidt is the author of The Happiness Hypothesis: Finding Modern Truth in Ancient Wisdom, and of The New York Times bestsellers The Righteous Mind: Why Good People are Divided by Politics and Religion, and The Coddling of the American Mind: How Good Intentions and Bad Ideas are Setting Up a Generation for Failure (co-authored with Greg Lukianoff). His next book is tentatively titled Three Stories about Capitalism: The Moral Psychology of Economic Life. He has given four TED talks.

Click here for Jonathan Haidt’s book The Coddling of the American Mind: How Good Intentions and Bad Ideas Are Setting Up a Generation for Failure.