Part 1: How to Tell if a Guy Has Lost His Balls 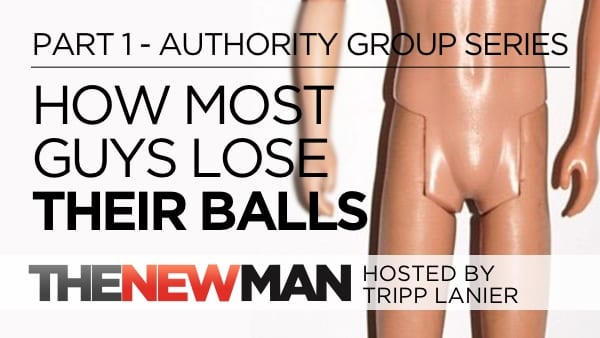 How Most Guys Lose Their Balls

This is part 1 in a short series where we’re learning why most guys stay stuck on some plateau in life and why a rare few are able to level up. This is all included in the Authority Group Coaching program that starts in October. You can learn more by clicking here.

So today we’re gonna talk about balls or courage or intestinal fortitude. What do I mean when I talk about a guy with balls or grapes or whatever pair of roundish food objects you prefer?

The Guy Who Has Lost Touch With His Huevos

The guy who has lost touch with his huevos is basically seeking comfort at all costs. Every decision he makes is determined by what will give him a greater sense of comfort in the short term. He wants a free lunch: he’s expecting that he can find a way to get what he wants without having to break a sweat, take any risks, or face any uncertainty.

The guy can’t take a punch. He’s convinced that if he falls down that he’ll never get back up. He’s decided he’s not going to take action until he feels confident. As if confidence is going to just fall out of the sky.

This guy is convinced that his ego fears are life and death. Getting rejected or being criticized or judged has to be avoided. He’s letting his self image hold him back from expanding into the life he truly wants. And unfortunately this desire for the illusion of control, safety, and comfort is a breeding ground for anxiety and low self esteem.

The Guy Who Knows How to Sack Up

If we flip it around, the guy who remembers his cajones understands that everything he wants is on the other side of his comfort zone. He expects things to be challenging and scary at times because it’s part of the growth process.

He understands that moving into the things that scare him actually make him stronger. He knows that building a life where he’s constantly avoiding discomfort makes him fragile and weak. He knows that confidence is a product of taking risks and learning from experience.

He remembers that he’s taken punches in the past. He’s fallen down before and he was able to pick himself back up. He understands that most of the time his “terror” is usually ego-related; who he is as a human being is not in any real life-or-death danger even though his ego is telling him otherwise.

Bottom line: This guy expects fear to show up and does what needs to be done even though he’s scared.

Let’s put this in perspective. Most of the time when I’m talking with someone and they’re telling me they’re scared to do XYZ in their life I believe them. I feel this often. And what I’ve found to be really helpful is to remember that (a) we may be scared but we’re not in any real life-or-death danger and (b) most of the time if the shit were to hit the fan we’d be able to recover pretty quickly. In most cases when I really help this guy identify the threat, the image we get is that he’s on a balance beam — but it’s only a foot off the ground. Sure, he may fall. And he doesn’t want to fall. But if he did, he’d be able to get back up pretty easily.

And yet most men will spend years of their lives avoiding that possibility of falling a mere foot.

I think it’s important for us to understand what real fear and real danger is. Years ago I was watching a documentary that followed some firefighters into the World Trade Center on September 11th. These people had been justifiably celebrated as heroes which in some ways made them seem like super-heroes. Like they were somehow immune to fear.

But in this program the camera was there as these men were in the lobby of one of the towers as they started their walk up the stairs. And I could see the looks on their faces. There was no action-movie bullshit bravado. There was no “total confidence” or certainty. They were justifiably scared. And they went up those stairs anyway. That was life and death.

What most of us are talking about creating with our lives is not life and death — so let’s stop acting like we’re going to die if we take a risk with our egos or a few bucks. Let’s stop believing this bullshit story that our mind uses to keep us paralyzed in fear.

Why I Work With a Coach

I say let’s because this affects me, too. It’s one of the reasons I’m working with my current coach, Phil Stutz. Even after years of doing this work, I could see where I was still holding back because I was afraid of something on an ego level. Left alone, I’m able to bullshit myself and make excuses. But putting this stuff out in the open with someone else helps me see what’s holding me back.

I’m able to make a better decision: Do I want to look back on my life and feel regret because I was afraid to get my feelings hurt? Or do I face my fears and go for what I really want even though it feels risky?

Through this work, I’m learning that I — we, all of us — get stronger when we confront the things that scare us in service of greater expansion and love. There are no free lunches. There are no shortcuts. There are no hacks.

Why I Created the Authority Group Coaching Program

This is one of the core elements of my Authority Group Coaching Program. It’s designed to help you get clarity on the things you’re wanting and then feel the excitement, power, and relief that comes from moving through your comfort zone. No more anxiously waiting for things to be safe. No more pissing away opportunities because we’re afraid of being uncomfortable. As a group we’ll be learning how to be more bold together and actually have fun as we grow beyond our current situation.

There are only six total seats available in this group. Click here if you’d like to learn more about how to claim one for yourself.

In the next chapter we’re going to discuss why most guys get stuck in the “professional friend zone” and why others become authorities in their profession.