100 How to Spank Your Way to Enlightenment – Spankneesh

Does life sometimes feel like a hamster wheel where you’re constantly chasing more money, sex or something else?

Since we all end up dead anyway, should life be taken seriously?

And how is it possible that a man from India can literally spank you into enlightenment?

In this episode we go deep with His Holy Holiness Sri Sri Sri Spankneesh Ji, a controversial spiritual guru. We’re talking about the meaning of life, spanking butts and, well, shit. 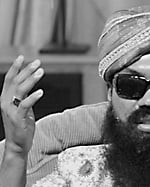 Spankneesh ji, as he is fondly known to his devotees worldwide, is a cultural phenomenon. No one knows when exactly he was born, but it is said that where he was born is in South India. Spankneesh ji is a modern day guru, that is dedicated to assisting the seeker in finding the guru within themselves. He is known as the “Bling” guru, for he synthesises East/West, Modern and mystical, in a rare blend of philosophy and teaching that is practical and applicable for the modern man.

Whether advising presidents, politcians, rockstars, celebrities, or the everyday man, Spankneesh has one sole aim, to bring about a more conscious, enlightened society. His vision is to cultivate what he terms as “the new human”, one that is fully rested in his Being, as well as fully engaged in life.

Spankneesh is a reknowned humanitarian, who has been responsible for starting many global initiatives. Whether is it is his educational institution for higher learning, Spank U. Or his state of art Spankville campus for Enlightenment, the financial institutions, such as Spank Bank.  He is also the founder and driving creative force behind OMBOY Media, a visionary media company dedicated to raising the consciousness of the planet.

Spankneesh regularly draws crowds of more than 300,000 to hear him speak, as well as receive his unique yet profoundly effective brand of blessing known as “The ShaktiPat Spank Transmission”.  He is the creator of the reknowned “S&M Technique” that is currently being regularly practiced by over 3 million people every day. Over the last decade more than 6 million people have been personally touched by the grace of Spankneesh ji.

Spankneesh regularly speaks at some of the world’s most prominent international leadership forums. In February 2006, he particpated in panels at the Global Alliance for Economic Regeneration . In 2007 he was the keynote speaker as well as received the reknowned Sir Richard Branson award for distinguished global citizen from the Helhiem Institute. In 2009, he has addressed audiences in 33 countires ranging from Brazil, Mexico, Ghana, Fiji, Denmark, Sweden, Japan, Australia, Germany, Israel, and many more.

In 2010 his new book was released called “The Bling of Being” to much acclaim, and in record time reached number one on the Burundi Times Bestseller list for 8 consecutive weeks. It also became the all time best selling book in the history of the country of Fiji.

Spankneesh ji, says that ” A new era in human consciouness is not coming, but it is here now. The entire world is waking up, and shaking up to who we are. These are intense times, where the Cosmic Dj, is playing some tunes that we may not like so much, but we must keep dancing, no matter what. These are the times we must access the inner ryhthm inside of ourselves, and not allow the external music to determine our freedom. We must remember that the groove is in the heart.”

Spankneesh ji is the modern guru, for the modern times, with a modern message.